Ixtapa Zihuatanejo, on April 20th 2018-. Within the framework of the 43rd edition of Tianguis Turístico 2018, Ixtapa Zihuatanejo positioned itself once again as one of the favourite destinations, not only by the tourists, but by the business partners, having concretized excellent results through signatures of conventions, new national and international direct flights and more than 40 business meeting with Mexican and foreign tour operators.

Diverse announcements were realized in this edition of Tianguis, and both the assistants of the building and the national and international press witnessed success and work which Ixtapa Zihuatanejo finalized by strengthening and by increasing its connectivity and its tourist offer.

In this sense, the Government of the State of Guerrero, of which Ixtapa Zihuatanejo is a member, in association with Mexico City realized a convention signature to coordinate a strategic plan to generate actions between the destinations of the State and the capital city of the country. The convention tries to create the ideal conditions for the tourism intended for major adults, retired people and people with reduced mobility, to develop new tourist products, as well as promote the sector between both entities.

Regarding connectivity, it’s worth underlining that the Managing director of TAR, Rodrigo Vázquez, announced the launch of the special package called “Star Dolly “, a specialized program, the objective is to strengthen the tourism towards Ixtapa Zihuatanejo. On the other hand, the manager of the airline supported an increase of the number of seats in the flights from Querétaro to Zihuatanejo, from June 18th. In the same way, with Volaris confirmed the continuity of the direct flight since Chicago in winter season, which will take back its operations from November of this year.

In a general way, with some national airlines, conventions were signed, in whom new price lists were defined for the return flights, the special prices for workers of the tourist sector of the State, as well as for the business trips. Furthermore, it allowed an important promotion campaign to increase the interconnection between Ixtapa Zihuatanejo and the cities of the country.

“It was an important Tianguis Turístico edition for Ixtapa Zihuatanejo and we are very proud of the work which realized the state’s delegation. In our case we had around 40 business meeting with national and international partners, we obtained an increase of frequencies with TAR for the road Querétaro-Zihuatanejo, the continuity of the Flight from Chicago with Volaris in winter season and conventions with diverse national and international airlines “, underlined Pierre Castelán, Director of the Convention the Visitors Office of Ixtapa Zihuatanejo (OCVIZ).

Besides, the destination handed rewards to the national and international partners; ” we are aware of whom we would not be where we are without the support of our allies, that’s why we want to reward them. They are many years of collaboration and we want that they know that they can count on us and that we will continue to work to offer the best offers to our tourists “.

After this Tianguis Turístico edition 2018, Ixtapa Zihuatanejo strengthened itself as one of the destinations of the country the most attached to offer the best new and tourist products to its visitors. It’s worth insisting on the fact that the delegation of the binomial consists of a team of more than 50 persons, between hotelkeepers and of service providers, who also concretized important meetings to increase the offer of the destination. “Undoubtedly as well our binomial as Guerrero in general obtained big results in this edition. Our pavilion was one of the most visited and Mazatlán received us with the open arms, it was a big Tianguis. Now that in 2019 it returns home we are going to work the double to put in the height our State “, concluded the Director of the OCVIZ. 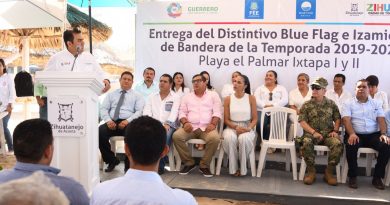